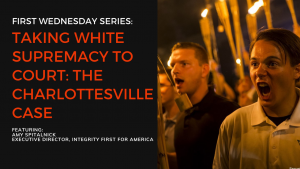 Three years ago, neo-Nazis and white supremacists descended on Charlottesville, VA for a weekend of violence. This violence was no accident — rather, it was the result of months of planning. And it served as a harbinger of the cycle of extremist terror that has followed.

Integrity First for America, in partnership with a world-class legal team, is taking on those responsible, holding them accountable in federal court.

IFA’s lawsuit details how these extremists conspired online to orchestrate that weekend of violence. It provides a tangible way to take action against the white supremacy and extremism that’s poisoning this country — with the potential to bankrupt and dismantle the leaders and hate groups at the center of this movement.

Join IFA Executive Director Amy Spitalnick for a conversation on this landmark case and the fight against white supremacy and violent extremism.